Cats are taking over the world––with allergies not so far behind. Does having allergies to cats mean you can never have a plucky little feline of your own? The answer: Not necessarily!

It might be helpful to know how cat allergies work in the first place. A common misconception is that a cat’s fur is what causes cat allergies. However, it is actually Fel d 1, a protein present in cats’ sebaceous glands, saliva, and fur. Produced mainly in their sebaceous glands, Fel d 1 becomes dissipated through a cat’s fur when they lick themselves. Fur laden with Fel d 1 is then shed and becomes airborne, causing allergic reactions.

Symptoms of cat allergies include red, itchy eyes, watery nose, and bouts of sneezing. Some factors that affect Fel d 1 production also vary with each cat. For example, male cats produce more Fel d 1 than females, and unneutered males produce more of the allergen as opposed to neutered males. Darker cats are known to produce more Fel d 1 than light-colored cats, and kittens are also known to produce fewer of these allergens than adult cats.

Which Cats Are Hypoallergenic?

Unfortunately, no cat is fully hypoallergenic. However, there are several cat breeds that produce fewer Fel d 1 proteins, making an allergy flare-up less likely. Here are some of the best cat breeds for people with allergies.

Also known as the Colorpoint Longhair, this beautiful Oriental-type cat doesn’t look to be a likely candidate for the best hypoallergenic cats. Despite having long and silky fur, Javanese cats are actually single-coat cats, unlike other long-haired breeds that usually have double-coat fur. This means that their fur sticks close to their skin, which contributes to their long and sleek look. The lack of an undercoat also means they have less fur to groom––giving them more time to bond with their humans, and also shed less fur to cause allergic reactions.

Javanese cats are known to be very intelligent and vocal. They are also known to be very playful and active. They also grow to become very fond of their human owners, always seeking contact, vocalizing for attention, and are notorious “supervisors,” who easily get depressed when regularly ignored or neglected.

Balinese cats are another long-haired cat breed that is surprisingly best for people with cat allergies. Also known as the long-haired variation of Siamese cats, Balinese cats are actually a natural mutation of the Siamese breed, and are effectively the same cat––but with a longer coat. While they may not be fully hypoallergenic, they are known to produce less Fel d 1 and shed less fur than other cats because they lack a fur undercoat.

Because of its close relations with Siamese cats, Balinese cats have many shared qualities. Balinese cats are very social and talkative, with a tendency to vocalize their feline opinions often and with persistence. Known to be quite the acrobats, they are also known to enjoy close attachments with their owners, constantly seeking physical contact and affection.

Oriental Shorthairs are a breed of domestic cats that are closely related to Siamese cats. It shares the Siamese cats’ sleek and elongated head shape and body type but possesses a wide variety of coat patterns and colors. Their coats are quite fine and silky to the touch, but also short and aren’t prone to shedding, especially when given regular brushing sessions (which they would love!).

Oriental Shorthairs are known to be very active cats that are social and incredibly curious about their environment––making them quite the slippery patient at many a veterinarian’s offices. Their close relation to Siamese cats means they share many personality traits, the more well-known ones being their intelligence, increased longing for attention, and the tendency towards persistent vocalization.

These delicate-looking cats are a breed of cat that has no other hair save for down, or undercoat, which is usually a very fine layer of fur underneath the rough outer guard hair and middle awn hairs in other cats. With Cornish Rex cats, their singular layer of fur is extremely fine and tends to curl. This also makes them less adept to cold environments, and are known to stay close to warm areas and surfaces such as laptops, light sources, and the exposed skin of their owners. Because they lack the coarse, outer guard hair, Cornish Rex cats don’t shed as much as other cats, and require very little grooming.

Cornish Rex cats are known to be extremely fast and agile, often seen galloping all over their home. They are also known to exhibit kitten-like behavior well into their adulthood and adore playing fetch, performing acrobatics, and racing other pets in the household. Being an extremely curious and sociable cat, it can easily befriend other household animals, and constantly seeks out human company.

This unique-looking breed of cat with their curly whiskers and coat, large expressive eyes often give them the alternate moniker of “Alien Cat” or “Fairy Cat.” Like the Cornish Rex cats, Devon Rex cats possess mostly undercoat fur but have a little more guard hair than their Cornish cousins. Devon Rex cats also have visibly curlier fur, due to a specific genetic mutation that is different from other curly-haired cat breeds. They are not known to shed a lot or require much grooming either, making allergic reactions less likely.

Devon Rex cats are known to have very mischievous personalities, often being called akin to a monkey in a cat suit. They are especially fond of jumping and sitting in spaces they deem large enough to fit them, making them a common sight in odd nooks and crannies of the house, such as closets, shelves, or baskets. They also love seeking out high spots in any room as they love to watch everyone around them, often preferring to perch on their favorite human’s head or shoulders. An intelligent breed, Devon Cats can be taught a variety of tricks that are usually taught to dogs.

Siberian cats are a centuries-old cat breed that has their origins in Russia and is believed to be an ancestor to all modern long-haired cats. Also known as the Moscow Semi-Longhair, it is closely related to another famous longhair, the Norwegian Forest Cat.

Despite possessing all three fur types to protect themselves from severe Russian weather, Siberian cats are known to have lower levels of Fel d 1 than regular cats and have decreased dander qualities as well.

Siberian cats with their fluffy exterior and sweetly expressive round eyes belie an exceptionally athletic and agile personality. Being of an ancient breed, Siberian cats are still relatively closer to their natural wild state and are powerfully built, with strong legs, barrelled chests, and broad paws. Intelligent, playful, and naturally adventurous, Siberian cats are communal by nature, preferring the company of other humans and pets to solitude. While mellow, they can also be quite vocal, and speak with a series of chirps and trills.

Russian Blue cats are well-known for their distinctive silver to slate grey coat and green eyes. Believed to have originated in the Arkhangelsk port in Russia, they are sometimes called “Archangel Blues.” Russian Blue cats possess a double coat, with a soft, downy undercoat the same length as its guard hairs, all blue with silver tips. This makes Russian Blue fur thick and plush to the touch. The build of their fur also makes them tolerable to people with mild to moderate allergies, as the thickness of their coat keeps the allergens close to the cat’s skin. Russian Blue cats are also known to produce less Fel d 1 than other cats.

Russian Blue cats are an intelligent breed and can be rather reserved around people they don’t know very well. Highly curious, they also enjoy playing fetch and opening all the manner of doors but are also known to be sensitively attuned to their owner’s emotions. These cats also have an excellent memory, over time learning where their owners hide toys and treats.

Sphynx cats are most popularly known as a hairless breed, owing to selective breeding. Some Sphynx cats may be completely hairless, while others may have a soft covering of fine fuzz. They are known to be very warm to the touch and are probably known as the closest to being the most hypoallergenic cat. While grooming is not an issue with these warm, hairless cats, they do require regular sponge baths to control oil secretions.

Sphynx cats are highly extroverted and are often compared to dogs for their loyal and friendly personalities. They will often greet their owners at the door and are even friendly with strangers.

Bengal cats and their unique spotted pelts make them an exotic sight to behold. A hybrid of domestic cats and the Asian leopard cat, their short coats are known for having an assortment of rosettes and marbling. Because of their short fur, they don’t shed as much and produce fewer allergens.

Bengal cats are known to be very active and energetic, with many owners comparing them to dogs for their fondness of retrieving objects and playing with water. Bengal cats also love climbing things and investigating new areas, items, or people.

Which of these 9 cat breeds for people with allergies would you choose?

A Guide to Owning Pets in a Shared Living Space 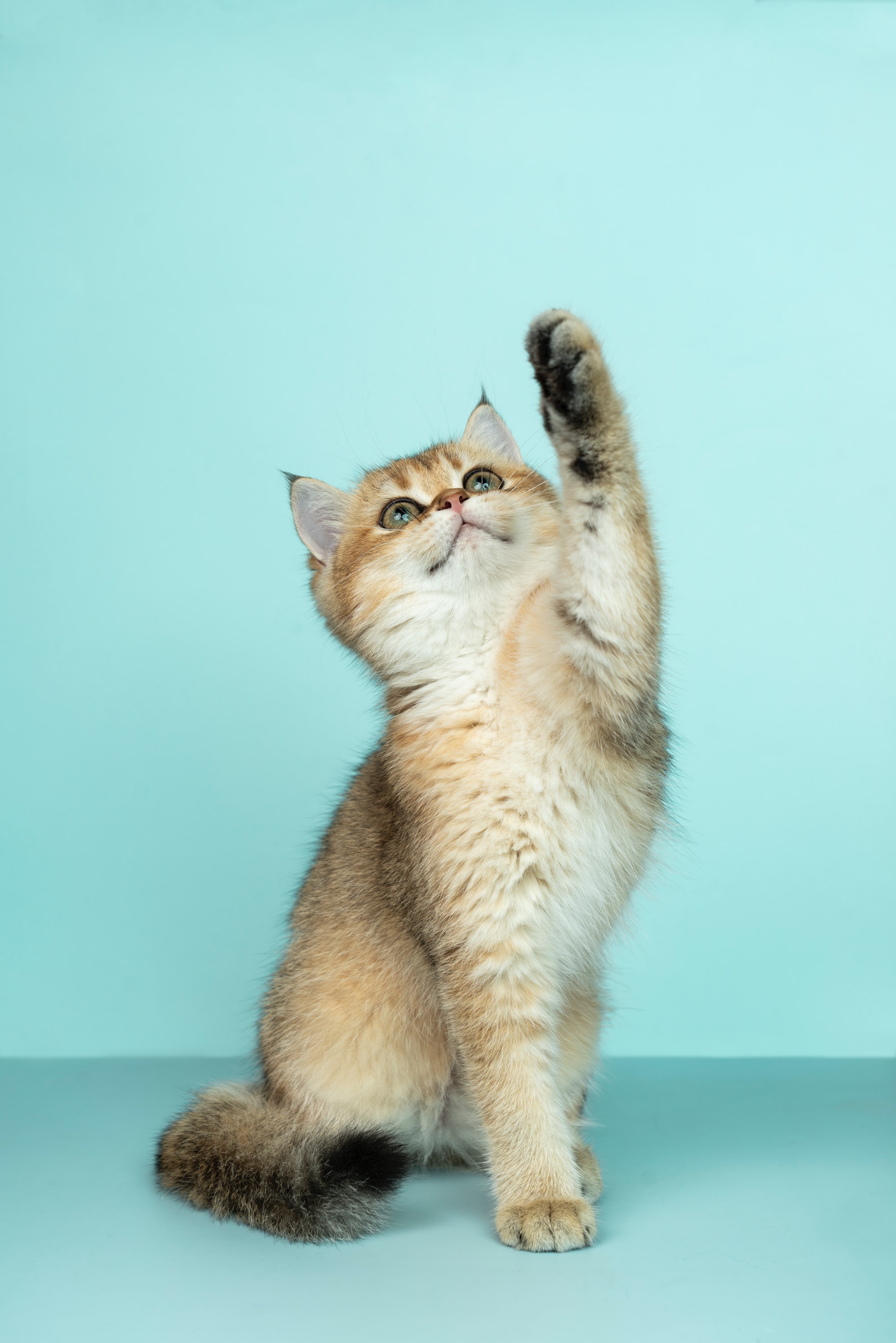 10 Genius Supplies Every Cat Owner Should Have